Posted on February 18, 2013 by notwithoutmyhandbag

Celebrities and politics. Two great tastes that don’t really go so well together. For ever well-meaning, deeply involved celebrity who uses their status, money, and power to do something good (see: Audrey Hepburn, who we’ll be talking about later), there’s some starlet who has some half-formed idea that “the thing in Angola is bad…or something” and puts their well-manicured foot in their mouth and ends up trivializing the thing they wanted to help. 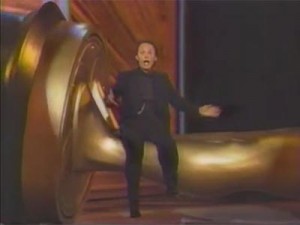 The Oscars in 1993, for the films of 1992, are easily the most political show the Oscars ever did. Some of it planned, a lot of it not.

See, 1992 was “The Year of the Woman.” The best information I can find on where that label came from is that’s the year the U.S. Senate went from two women to seven. Out of 100. Yippee. The Oscars decided to get in on that sweet, sweet condescension and decided it was also Oscar’s Year of the Woman, so they padded out the show with film montage salutes to the women editors and actors and writers. And if that wasn’t good enough, there’s a song about it by Liza – see our coverage of the show’s musical monstrosities for that one. It’s not pretty. 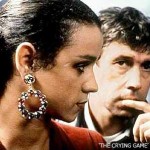 The secret is the microfilm is in those earrings.

Opening the show, our host (again) Billy Crystal really mines the secret of The Crying Game for jokes. It comes up a lot.They flirt with spoiling it repeatedly, but manage to not quite spill the beans. Billy Crystal’s best line: “The Crying Game proved one thing – white men CAN jump.”

This was probably the last great pre-internet spoiler, and people were great at not ruining the surprise. The secret wouldn’t make it past preview screenings now, and that’s a shame, because it’s a great movie, and a great shock that spins the movie off in another direction. (I’m just assuming you all know it, with Mayor Quimby having ruined it for you.)

The unscheduled politics show up only a few awards in, when presenters Susan Sarandon and Tim Robbins break from the script to plead for Haitian refugees held at Guantanamo Bay and not let into the U.S. because they were HIV+. Law students and non-profits took up their case, and their detention was ruled unconstitutional later that year. 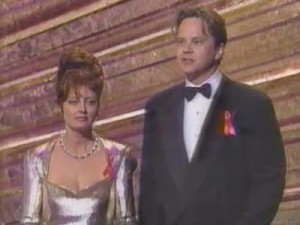 Commentators at the time were livid these dern liberals would derail the show for their pet cause.

Not long afterward, the Documentary winner goes past her allotted time lambasting the government for lying about bad things we did in Panama in the first Bush administration. I only mention this because the U.S. mission in Panama seems so very quaint now, and that’s sad.

The final great political interruption comes from Richard Gere, in the most notorious thing he actually, really did. Not what he was rumored to do, because he didn’t do that thing you’re thinking of. Gere also goes off script before presenting an award to talk about how many people are watching the show, and how all that energy could be focused into something good. Something like mentally sending Deng Xiaoping a psychic message to pull Chinese troops out of Tibet. Mentioning the cause you care about and have worked on for years is one thing, and Gere has certainly been committed to this issue before and since, but psychic messages instead of a call for political action? Especially since we had a new president to pester? God, it would have been hysterical is if Deng died right then, the victim of mass-psychic-murder, but the Chinese leader held on another four years.

It’s what gifs are made for.

Up next: The winners! Weird TV ads! Production number hell!

This entry was posted in Blog and tagged humor, movies, oscars. Bookmark the permalink.