Posted on February 19, 2013 by notwithoutmyhandbag

One of my favorite things about the Oscars we don’t see any more is old timers getting their due. I appreciate that cutting the honorary awards makes the show move faster, but I miss the film clips and speeches from folks you don’t usually hear being heartfelt.

For example, Federico Fellini was finally given an honorary Oscar in 1993, which meant a crazy montage of women being whipped, clowns with giant fake boobs, and other assorted lunacy. And who was there to present it?

Marcello Mastroianni and Sophia Loren. The kind of people they just don’t make any more. I’m not even sure they are people.

Fellini’s speech is rather adorable, like he’s your shy grandpa, and he even says he wasn’t expecting this sort of award for another 25 years. (He died eight months later.) He’s like a cute little accented troll doll who makes movies that are uncomfortable nightmares. Then he strikes comedy gold when he stops thanking people to ask his wife and frequent star, Giulietta Masina, to please stop crying. Cut to Giulietta, looking like your grandmother at every wedding. 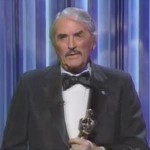 Just let him give awards to whoever he wants.

There were three honorary Oscars in 1993, which helped slow the show down, but were all rather touching if you’re a classic movie fan. Besides the adorable Fellini family and their adorable antics, there was a posthumous humanitarian Oscar for Audrey Hepburn, presented by Gregory Peck, her costar in her first big movie. As we covered in the 1992 article, she died very suddenly from an aggressive cancer in January ’93, which is when the nominations came out. So either they already planned to give her the award, or rushed to include her when they realized how dumb it was they hadn’t done it yet.

Her son accepted and called Gregory Peck “Greg,” which I find too cute. Atticus Finch shares a first name with the oldest of the Brady Bunch!

Then these two broad show up. 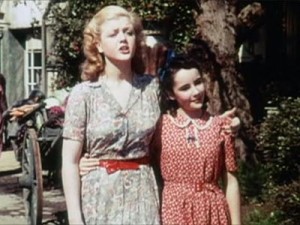 We’re here to see a man about a horse.

Yep, it’s Angela Lansbury presenting another humanitarian Oscar to Elizabeth Taylor. And yes, in that still from “National Velvet,” Lansbury’s the older sister. She’s been around…oh….a while. Liz’s getting the award for all the fund-raising and education she did to fight AIDS, which she was out in front on well before it was a cool thing to do. It’s a shame we tend to think of late-career Liz Taylor as…well…Michael Jackson’s slightly saner friend. 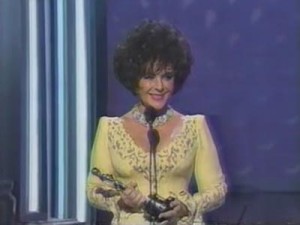 
Taylor’s speech has a level of eloquence I’m not sure I ever associated with her before. I’m don’t know if she wrote it or someone else did, but it’s a poetic call to action.

“I call upon you to prove we are a human race. To prove our love outweighs our hate. That our compassion is more compelling than our need to blame. That our sensitivity to those in need is stronger than our greed. That our ability to reason overcomes our fear.”

Good stuff. But enough of all the old geezers, who was actually competing that year? 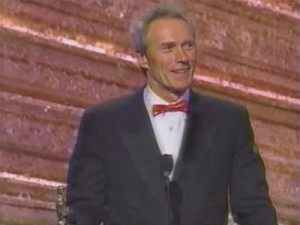 Yeah, it was one of the few years it’s tough to complain about Best Picture, because it was “Unforgiven,” which is a masterpiece. Clint Eastwood won for picture and director, and Gene Hackman won for Supporting Actor. No complaints there. But there was a winner that was controversial. 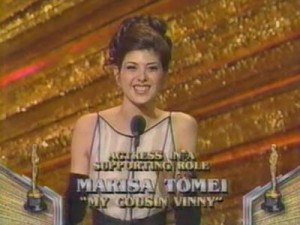 Joan Plowright – old, British, married to Olivier – was heavily favored to win best supporting actress, when all of a sudden, in swoops the white girl from “A Different World.” Rumors persist to this day that Jack Palance read the wrong name. True, it’s pretty rare for a comic performance to win, but when they do, it’s in supporting categories. And she’s proven since then she’s not a fluke (see “In the Bedroom.”) So let’s complain about something else. 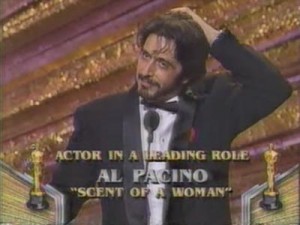 Let’s give a guy an award for playing Foghorn Leghorn! Al Pacino was a great actor. Was. His career can pretty neatly be divided into “Brilliant” and “After Scent of a Woman.” 1993 is the line. He was also nominated that night for his supporting turn in “Glengarry Glen Ross,” where the last vestige of the Pacino who was in “The Godfather” gasps, withers, and dies. Then the bombast and the scenery chewing just became so easy. Every now and then, old Al will peak out – a scene, a few lines, and you’ll sigh and think…damn. 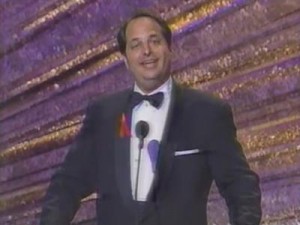 “‘To be…or not to be.’ Now my Hamlet has been seen by one billion people. Please, sit down.”

Did you know Jon Lovitz presented at the goddamn Oscars?. Seriously! He stole his scenes in “A League of their Own,” and apparently that qualifies him to give a sound effects editor a prize. I mention him because he has one of the funniest bits in the shortest amount of time I’ve ever seen on an awards show. Basically, he’s doing his Master Thespian schtick from SNL, which totally works in a room full of master thespians.

A commercial break or two later, Lovitz’s nemesis Andy Dick appears for about 1/10th of a second in a tortilla chip commercial. This is weird because “The Ben Stiller Show” had only been cancelled two months earlier, so either this was an old ad, or he was taking any work he could get.

Still to come: Really awful musical numbers (no, seriously, really awful), and a brief word from our sponsor.

This entry was posted in Blog and tagged humor, movies, oscars. Bookmark the permalink.