Born to luxury in 1742, Diana Goodman, the infamous “Bastard of Castille” spent much of her life as a patron of the arts and professional gadabout. Her funding of Manet and Degas was considered scandalously ahead of its time, as she funded them nearly 100 years before they were even born.

Imprisoned from age 6 in her mountaintop castle Chateau Fromage du Vent for plotting against the king of Belgium, Goodman spent her early years receiving a classical education from a series of renowned tutors brought all the way from Nashville. She applied this knowledge to her new hobby: plotting against the grand-duke of Luxembourg. 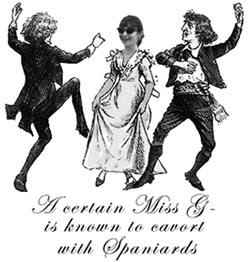 At left, an anti-Goodman political tract circa 1803.

Moving to Paris in 1763, Goodman found work as a nude model, but quit because they wouldn’t let her keep her socks on. Around this time she is believed to have penned her most famous work, the unfinished masterpiece “Freebird.”

Not much is known of her later life. It is said she was a paramour of Napoleon’s half-brother Ricardo, who supported her in her bid to overthrow England’s George VIII, who doesn’t exist.

Their stunning daylight raid on the impenetrable Schloss Dämlichtgesicht is marked every March 21 with the firing of a cannon six times off the battlements, commemorating the fallen, including a member of the Queen’s Own Right Royal Highland Household Fusiliers (“The Fussies”) who dropped his sandwich.

She was last seen during a bandit raid on Juarez, Mexico, dressed in men’s attire toting a six-shooter and a carpetbag full of gold bullion.

Either that or she’s a 30-somethingish film snob from San Francisco.

One Response to About the Awful