Posted on May 21, 2012 by notwithoutmyhandbag 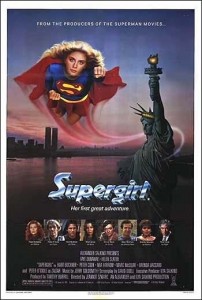 She never goes to New York, you liars!

Fun times with the LaserTime podcast guys talking about a classic “funny bad” bad movie, “Supergirl.” I forced them to watch it, and you can hear the high-quality nerd rage.

If you haven’t seen it, it’s a GREAT drinking with friends yelling at the screen type of bad movie. I’d say make a drinking game out of the product placement, but that might kill you and all your friends and then I’d feel bad.

Posted on April 8, 2012 by notwithoutmyhandbag

There have been about 30 film adaptations of “The Three Musketeers” since film was invented. But you know what all of them, as well as Dumas’ beloved novel were all missing? Airships. Finally, this film has rectified this horrible oversight.

This movie is a damn mess, but the kind of unbelievably wacky mess that I have to encourage people to see it. You will sit confused and boggled people spent money to make it.

They stick to the bare basics of the classic story for the most part, but despite those 30 other adaptations, figure it still needed jazzing up with even more action that is all ridiculously modern and piled with bad CGI. For instance, there’s a scene where Milady DeWinter (Milla Jovovich) strips off her hoop skirts to do a “Mission: Impossible”-style wire stunt into the palace, and finds a hidden vault strung with invisible razor wire that look like freakin’ lasers that she has to jump and shimmy through. How are these wires de-activated when a non-thief needs to get to the jewels inside? I’m guessing Ye Olde Retinal Scan.

I’m not even going to bother talking about the four heroes, because the three musketeers all suffer from total lack of character. Athos and Aramis look and act identical – I often couldn’t tell them apart. (You can tell which one’s Porthos because he talks about eating and drinking more.) D’Artagnan (the kid from ‘Percy Jackson’) is beyond annoying. He’s not so much a brash young man as Shia LeBeouf with PMS. It’s been a long time since I rooted more for the bad guys, which isn’t a shock considering they’re Mads Mikkelsen and Christoph Goddamn Waltz. They’re also the two who retain their dignity.

Then there’s the airships. The film opens with the musketeers breaking into a vault in Venice housing the works of, duh, Leonardo Da Vinci, because he’s the only person who ever invented anything. Despite the room being filled with thousands of priceless manuscripts, they steal just the airship one and flood the place. Jerks. Then the evil Buckingham (Orlando Bloom) steals it from them, and we fast forward to a year later and the regular ol’ story starts.

I don’t know how to feel about Orlando Bloom’s performance, because it is bizarre. On the one hand, I feel like he gets that this movie’s a joke and dials the foppishness to 11, prancing and preening with Gary Glitter hair. On the other hand, he’s not a convincing villain in a movie already brimming with them.

So there’s the usual musketeering and such and Christoph Waltz makes some speeches about his evil plans that never make much sense, until finally the heroes have to steal some jewels back from Buckingham, because if they don’t, it’ll start a war between France and England. To accomplish this, they steal the airship Buckingham’s now built – which looks like a galleon attached to a blimp – and use its onboard flamethrower(!) and Gattling gun(!!) to attack the Tower of London. Yep, that’ll stop that war alright.

Then there’s an airship battle, with cannons and guns and that rips of “Wrath of Khan” of all things. The stupid escalates at a furious pace as we see the airships are so precise and maneuverable four people can crew them just fine, and they can come up alongside each other at 10,000 feet up and push a gang-plank between them and people can walk across it without much wind or swaying or whatever. Then they crash them into Notre Dame.

I really want to know who exactly the filmmakers thought they were making this movie for, because I can’t think of the market segment that was crying out for this except fans of the ridiculous.

A definite pick for a fun night of jeering with your friends.

Posted on March 5, 2012 by notwithoutmyhandbag

Every Sunday, my buddy Toby and I get together and watch a terrible movie. It’s about time for me to share the suffering, so I’m going to start posting brief reviews of the crap we’ve watched. I know I should have done this years ago, but it wasn’t until last night’s movie – “Twilight: Breaking Dawn Part 1” – that I found myself bubbling with so much anger and so much confusion I felt like if I didn’t get it out of me I’d die a gruesome death (Hey! Just like in the movie! I can relate to Bella after all!)

It is a massive understatement to say I am not a Twilight fan. The story is perfectly crafted to feed into the worst instincts of adolescent girls, and I worry about what they’re taking away from it. I probably won’t review the first three movies, which we watched on Bad Movie Sundays past, because I have so little to say about 1 and 3, and so much burning feminist rage at 2. Plus, I think I cover a lot of what  I’d say below. This movie baffles me. I can’t remember the last time so little happening raised so many questions.

100 or so Questions about Twilight: Breaking Dawn Part 1