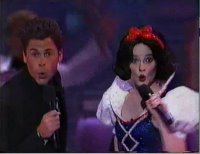 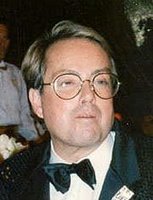 Allen Carr, The Man to Blame    Age (in ’89): 51
Then: Broadway producer and marketer who made gazillions from Robert Stigwood projects like “Grease” (stage and film), “Saturday Night Fever,” and “La Cage aux Folles.” Brief misstep by following Fever’s success with a film starring the Village People.
After: Returned to producing for the stage, talent management, wearing caftans. Passed away in 1999. 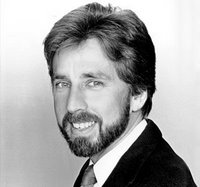 Steve Silver    Age: 45
Then: Creator of San Francisco mainstay stage show “Beach Blanket Babylon,” which had then been running for 15 years.
After: Died of AIDS in 1995; his wife took his place as the show’s creative director. “BBB” is still running. 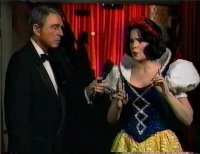 Army Archerd    Age: 67
Then: Columnist for Variety and emcee at many Hollywood premieres
Now:He’s moved to blogging for Variety, meaning he’s on his 55th year as a columnist. Passed away in 2009.

Eileen Bowman    Age: 22
Then: Stage work, mostly, including playing Snow White in “Beach Blanket Babylon,” which is how she got this gig. “BBB” is a series of topical satirical sketches, and at the time was about Snow White’s search for a prince is the framing device. Unfortunately, no one explained this device to the Oscar audience, so the appearance of Snow White (not licensed by Disney, not the movie’s anniversary or anything) kicks off the confusion.
Now: Stage work, mostly. Some walk-ons on TV shows, like “Renegade” and “Silk Stalkings.” She says it destroyed her career. 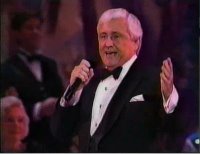 Merv Griffin    Age: 63
Then: Talk show host and game-show creator, Griffin had just had huge successes syndicating “Wheel of Fortune” and “Jeopardy!” His talk-show, which ran for 22 years, went off the air a year and a half before the Oscar show.
After: Went back to running his vast real-estate, television, and investment empire, though he released his first album in decades in 2001. Was worth roughly $1 billion when he passed away in 2007. 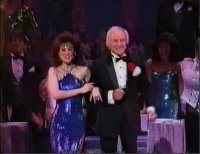 Buddy Rogers    Age: 84
Then: The star of the first film to win Best Picture in 1927, Rogers was retired from acting and singing. He received the Jean Hersholt Humanitarian award at the Oscars in 1985 for is charity work.
After: He passed away in 1999. 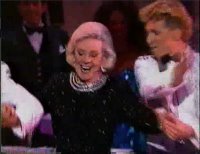 Alice Faye    Age: 73
Then: Movie and singing star in the ’30s and ’40s, Faye moved to radio with her husband, Phil Harris. In 1988, Faye was doing some stage work and a spokeswoman on senior issues for Pfizer pharmaceuticals.
After: She and Harris were married 54 years when he passed away in 1995. She passed away in 1998. 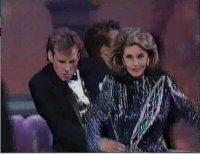 Cyd Charisse    Age: 67
Then: Ridiculously long-legged dancer, featured in “Singin’ in the Rain” with Gene Kelley and “Silk Stockings” with Fred Astaire. Was largely retired by this time.
After: Remained largely retired, but managed to make her Broadway debut at age 87 in “Grand Hotel.” She passed away in 2008. 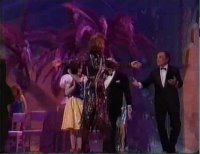 Tony Martin (far right)    Age: 76
Then: Hit singer, occasional actor and Alice Faye’s ex-husband, he was also largely retired, occasionally performing at limited engagements.
After: Still performing, including a two-night engagement in 2007, age 94. He and Cyd Charisse were married for 60 years when she passed away. He was the final survivor of this fiasco, dying in 2012. 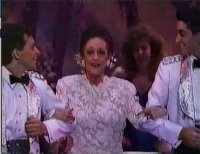 Dorothy Lamour    Age: 74
Then: Exotic-looking co-star of the Hope/Crosby “Road” movies, she was doing some occasional dinner theater, plus a cameo in “Creepshow 2” (!!) two years before.
After: Stayed retired. Passed away in 1996. 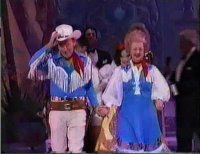 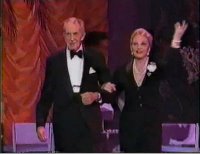 Vincent Price & Coral Browne    Ages: 77, 75
Then: Legendary actor known for his horror work, at the time he was enjoying new recognition with younger generations thanks to his “rap” in Michael Jackson’s “Thriller.” He was hosting PBS’ “Mystery,” and voicing the baddie in “The Great Mouse Detective.” She had retired from the stage and screen.
After: Coral passed away in 1991. Vincent’s featured appearance in “Edward Scissorhands,” by uber-fan Tim Burton, was his last film role. He passed away a week before Halloween, 1993. 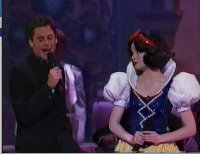 Rob Lowe    Age: 25
Then: Hunky brat-packer who had just had two big hits the previous years with “St. Elmo’s Fire” and “About Last Night.” Received a Golden Globe nomination for “Square Dance” that same year. His sex tape with two girls, one underage, leaked a few months after this.
Now: Dropped from the A list shortly after the Oscars, but kept working regularly. Career rebounded when he moved to television on “The West Wing” and “Brothers and Sisters.” 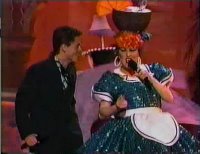 Val Diamond    Age: 37
Then: Beach Blanket Babylon headliner. Despite her featured spot in this number, she’s not credited. Which just adds to the confusion.
Now: Same. 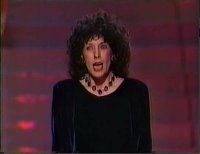 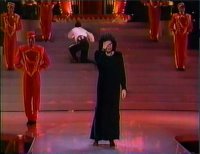 The Oscars     Age (in ’89): 61
Then: Reaction to the show was an avalanche of bile. 17 stars, including Julie Andrews, Sidney Lumet, Paul Newman, Gregory Peck and Billy Wilder, published a letter in the trades calling the show “an embarrassment,” saying it was “neither fitting nor acceptable that the best work in motion pictures be acknowledged in such a demeaning fashion.” The Academy formed a committee to figure out what went wrong.
After: Many changes the committee recommended were made, like having one host, more lone presenters to cut out the awkward chit-chat, and fewer, shorter dance numbers. Billy Crystal hosted the next year and started with what became his signature bit over seven more Oscar shows – lampooning the big tacky numbers that used to start the show. 2019 is the first time since 1989 there is no host for the show.

Bet you thought that number is just awful and interminable, right? But there’s a second, even worse number.

Next: Young Stars of Tomorrow.

This entry was posted in Blog and tagged fail, humor, movies, oscars, TV. Bookmark the permalink.