Posted on February 23, 2012 by notwithoutmyhandbag

If there’s one image people know from the Oscars in 1992, it’s this one: 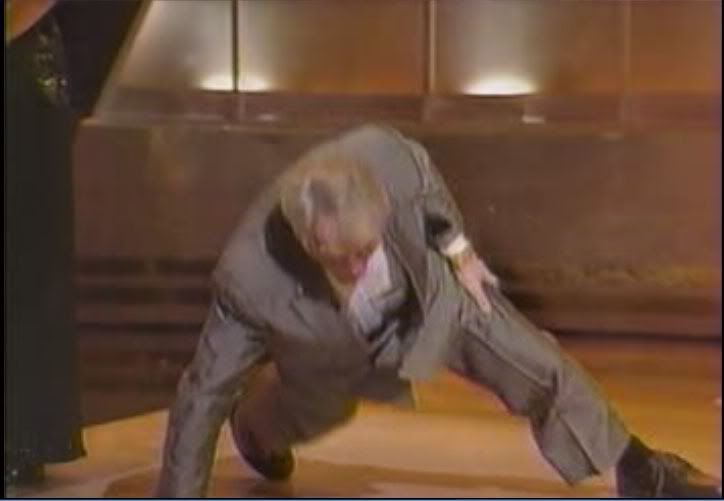 Jack Palance doing one-arm push-ups right after winning Best Supporting Actor. It was the first award of the night, and immediately became the perfect gag for Billy Crystal to run with. Jack Palance had a weird career – great start, OK foreign stuff, terrible cheapo foreign crap, a lucky break – and he seriously did not care about what people thought. That made it awesome. Yesterday, we covered the monologue and the weird combinations of presenters. Today, it’s the rest of the show. Let’s take a look back 20 years and talk about the more interesting parts of the show. 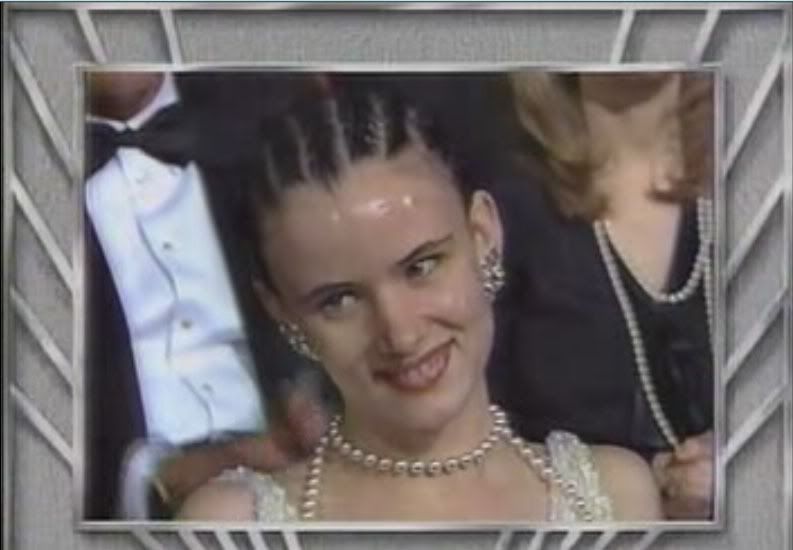 Mercedes Ruehl won Best Supporting Actress for “The Fisher King,” but the much, much bigger story in this category is nominee Juliette Lewis‘ hair. Everybody made fun of that shit. Sadly, I couldn’t get a good screenshot of her with her then boyfriend, Brad Pitt, who broke out that year in “Thelma and Louise,” but he was sporting a straggly beard on his first trip to the big show. Maybe they were still filming “Kalifornia”? This was HER breakout role, and instead of looking like the next big thing, she looks like Betty Boop just back from Cabo. 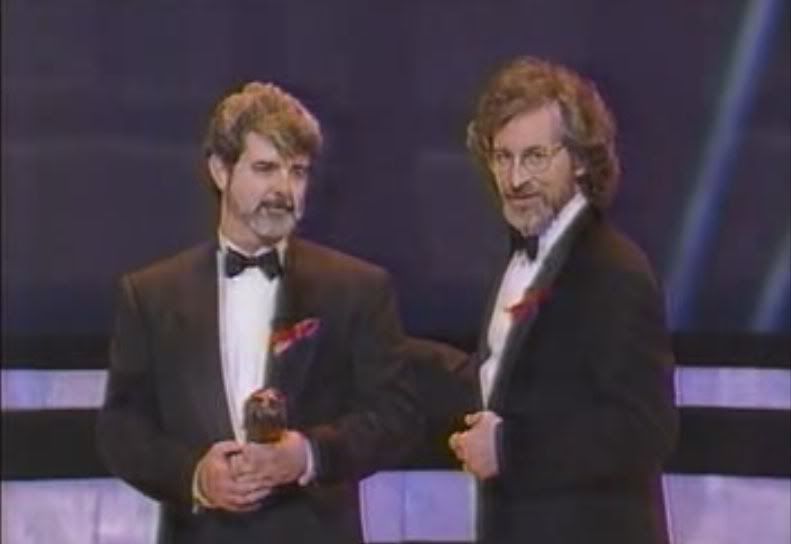 Irving G. Thalberg award: George Lucas
I’m going to skip saying anything about George Lucas and the evil he was planning to talk about Steven Spielberg’s introduction. First, his hair is magnificent. Check out that volumizing mousse action. Second, and I can’t believe this happened, in his voiceover for the film segment, he calls Indiana Jones an adventurous anthropologist. I shit you not – anthropologist. He is SO lucky the internet wasn’t big yet, because it. would. have. exploded. 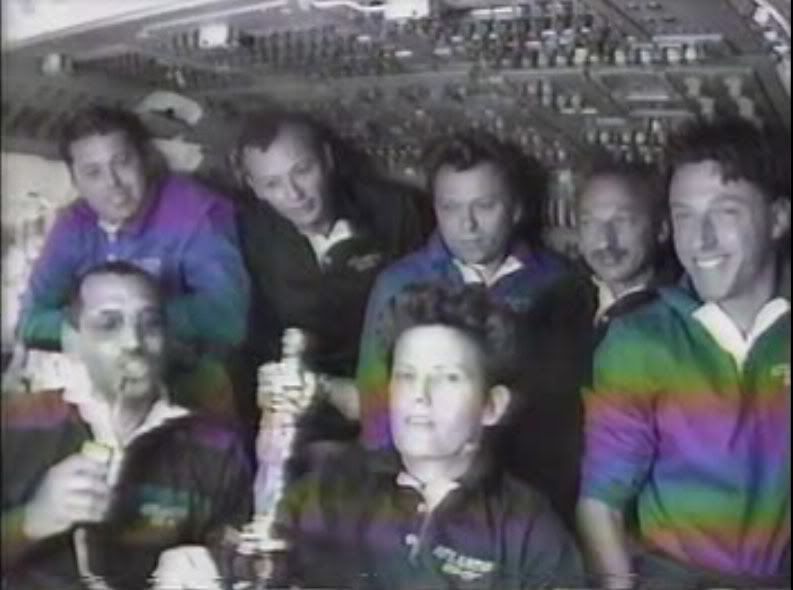 At the end of Lucas’ speech, he gets a special live greeting from Space Shuttle Atlantis. Of note on-board are the mission’s commander, Charles F. Bolden, who became the head of NASA in 2009; Kathryn Sullivan, the first American woman to walk in space; Michael Foale (far right), who, thanks to his later time on Mir, has spent over a year in outer space; and Dirk Frimout (second from right), who was a massive hit in his home country as the first Belgian in space. Also, he’s a viscount. 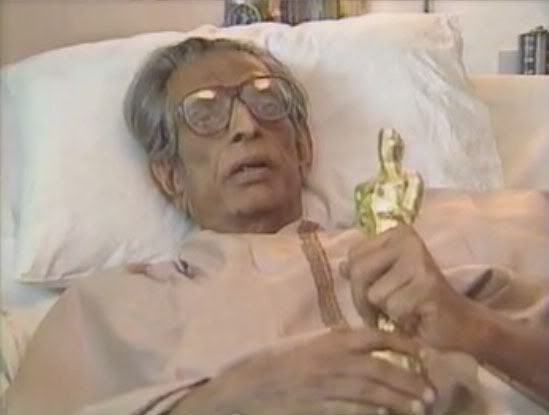 The next special award was a lifetime achievement Oscar to Satyajit Ray, director of the Apu Trilogy. You can keep your Quikimart jokes to yourself, because they’re amazing movies and you should rent them, you uncultured heathen. Ray was literally on his deathbed, so he spoke via satellite from the hospital, rambling about how he wrote a fan letter to Deanna Durbin as a kid. It’s kind of cute, but it doesn’t really tell you anything about him as a filmmaker. He actually still sounds pissed at the stars that didn’t write him back. 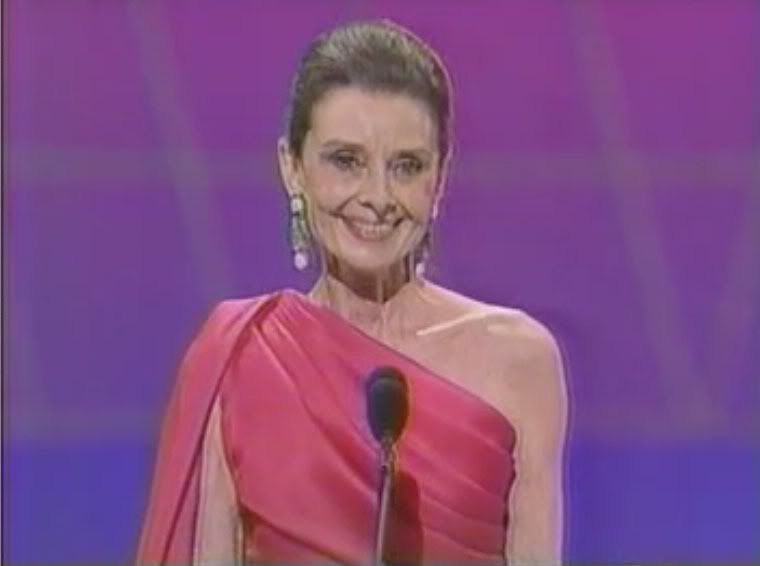 The lady presenting him the award? Oh, nobody. Just Audrey Hepburn. Looking fabulous at 62, few, including her, would have guessed how close she was to the end. Six months later, she suffered abdominal pain during one of her many UNICEF trips to Africa, which turned out to be a rare abdominal cancer. She passed away January 1993.

In other depressing news, a big deal was made at the Oscars about these new-fangled ribbons everyone was wearing. Billy Crystal even had to explain it – the red ribbons were for AIDS awareness. Since then, every cause has had to fight every other cause over who gets what ribbon, with purple representing everything from animal abuse to hidradenitis suppurativa, a skin disease marked by non-contagious chronic abscesses. 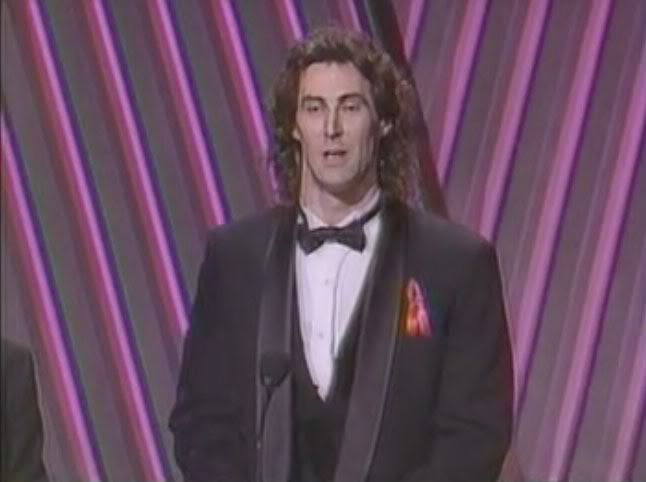 The red ribbons tied in with another Oscar first. When “Beauty and the Beast,” from the movie of the same name, won Best Song, Alan Menken was joined onstage by the boyfriend of his cowriter, Howard Ashman. Ashman had died of AIDS the year before, and his boyfriend accepting his award  was a first.

Now, to lighten the mood, I should probably mention the ads. This is a three and a half hour show, but there are fewer ads each break than I was expecting. Few were that funny or interesting, but it is an interesting little window into the time. 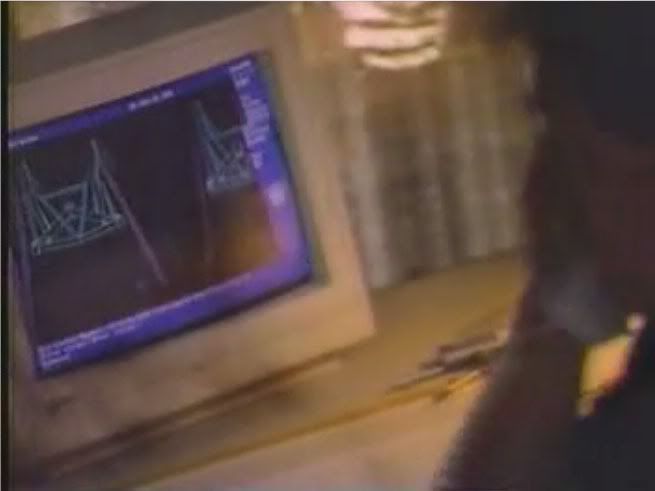 First up, AT&T. They ran several ads touting their flexible plans for small businesses. Remember, this is pre-internet, and long-distance carriers were in a massive war much the way cell-phone providers are now. AT&T wanted to show businesses they can get a company all the phone lines it wants so it can do business – even in foreign countries! Incredible! If you make a lot of calls to just a few area codes, they can make that area code at a special rate, and even help if you have more than one location. Amazing! 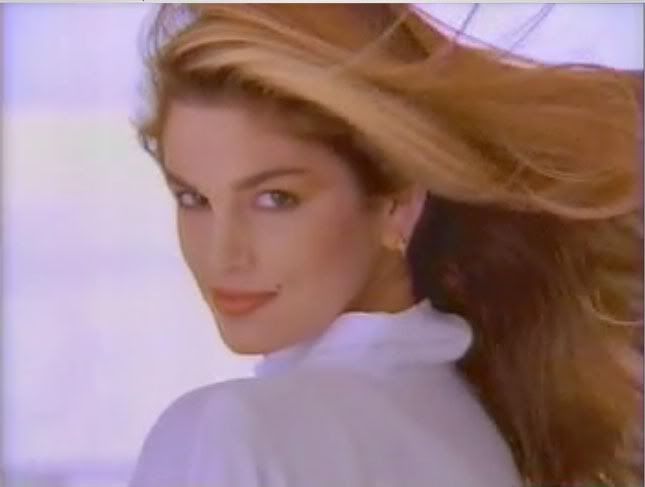 Literally half of the ads contained this lady right here: Cindy Crawford. The then-Mrs. Richard Gere appeared in an ad EVERY commercial break for Revlon or Pepsi or whatever. She was unavoidable in 1992. Not that anyone was complaining – I’d take a statuesque chemical engineering major over a bored-looking starvation victim any day. 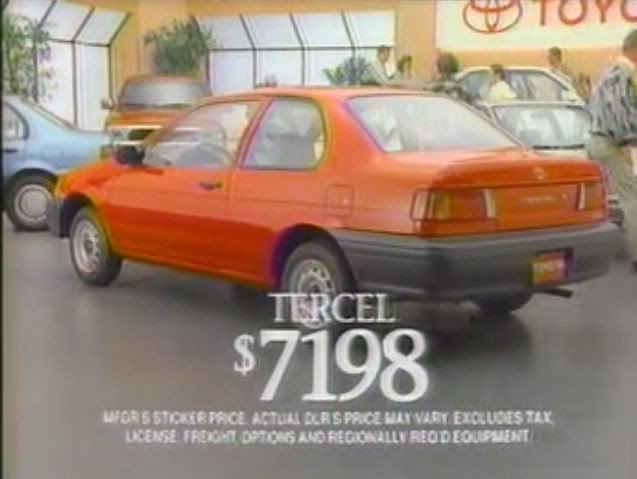 There were a few car ads – Chevy and Ford mostly showed off their trucks, which, to be honest, don’t look much different that a mid-size truck today. Toyota, however, showed off their models and they are true early ’90s – boxy and boring. Not much to differentiate the outside of their models except their size. It was not a good time for design – the late ’80s and early ’90s are sort of their own decade when it comes to ugliness. 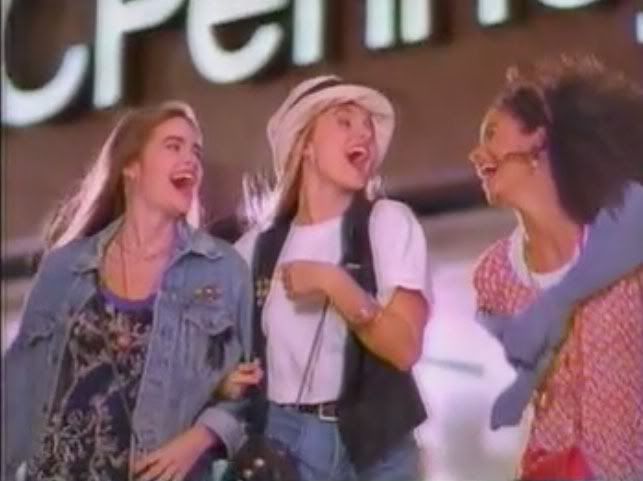 For instance, the girl in the middle is wearing bike shorts under high-waisted denim shorts with folded edges. For the time, that was a conservative fashion statement.

Would it surprise you to learn this girl is doing the Roger Rabbit? Because it shouldn’t. 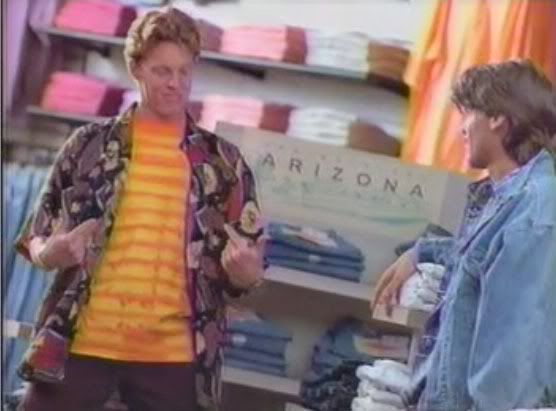 Finally we have this ad. This Gap ad ran for goddamn years, and it was stupid. 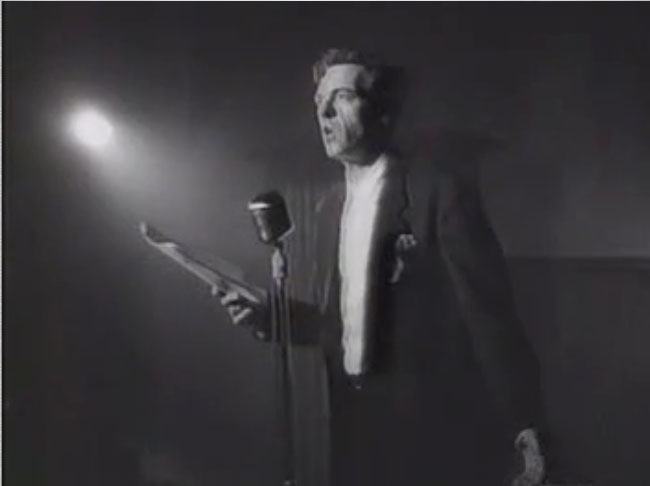 Maybe it wasn’t even years, but it ran so often I still remembered every line 20 years later. Click on Mr. Tuxedo here for a beat-ish poem about Gap jeans, intercut with that one chick from Twin Peaks’ butt and a motorcycle.

I have an irrational hatred for this ad. In case you didn’t notice. This one and a Nissan ad that had a lady shout-singing intercut with a car going fast on a dry lake bed played over and over and over when I was up late watching Mystery Science Theater. Also, Zima.

Let’s go back to the awards show and end on a happy note. After over two-and-a-half hours of no one mentioning it and it not being nominated for anything, we get to the end of the show and “Silence of the Lambs” sweeps. It wins screenplay, actor, actress, director, and picture – something only done twice before and has never been done since. A horror film, released in February of that year, manages to crush Oscar bait like “Bugsy” and “The Prince of Tides,” sentimental fare “Beauty and the Beast,” and brilliant-but-controversial “JFK.” Completely insane.

Oh, and check out the Best Picture presenters. 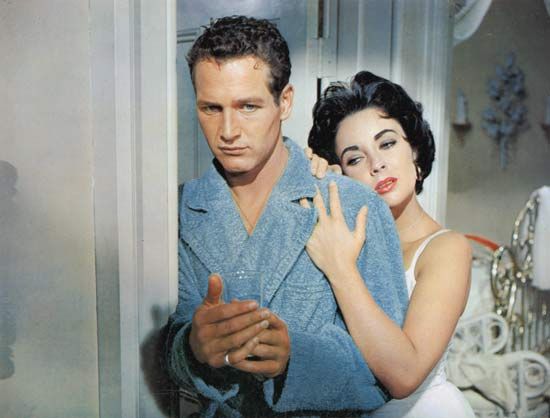 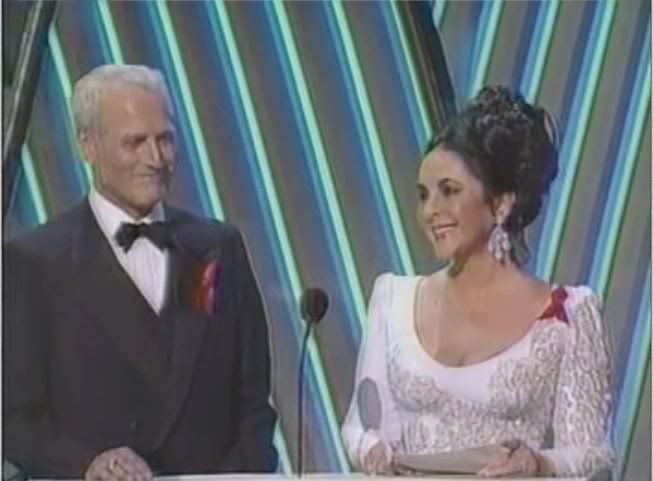 This is the sort of glamor we don’t have that much any more.Here and there, I guess, but seeing as there are whole publications dedicated to showing celebrities doing normal, mundane, and embarrassing things….I don’t know. Maybe it was the studio system and their training. But these two, besides being great actors, were interesting people and great humanitarians. And looked fucking gorgeous while giving an award to the guys who made the movie where a psycho is making a human suit out of fat chicks.

Up Next: Pointless Production Numbers!

This entry was posted in Blog and tagged humor, movies, oscars, TV. Bookmark the permalink.