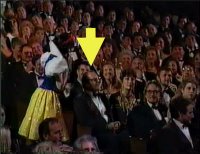 Jack Nicholson    Age (in ’89): 51
Then: Was on a roll. Followed up “Terms of Endearment” (for which he won an Oscar) with “Prizzi’s Honor” and “Witches of Eastwick.”
After: Has been alternating great and “eh” films pretty solidly since then. For every “The Departed,” there’s a “Man Trouble,” for every “A Few Good Men,” there’s a “Wolf.” Still has a better career than everyone on this list. 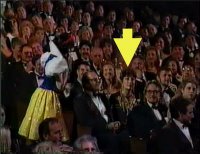 Anjelica Huston    Age: 37
Then: Won an Oscar a few years before for “Prizzi’s Honor.”
After: Ended her 16-year relationship with Nicholson that year after he knocked up another woman. Then she really broke out, with “Enemies, A Love Story,” “The Grifters,” and “Addams Family.” Now she’s in everything Wes Anderson does. 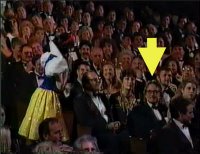 Michael Douglas     Age: 44
Then: Right at the end of a string of great hits, “Romancing the Stone,” “Wall Street,” and “Fatal Attraction.”
Now: Too busy staring at Catherine Zeta-Jones and thinking, “Boy, am I one lucky bastard” to make very good movies. Mostly misses since then, with some glaring exceptions (ie. “Wonder Boys.”) 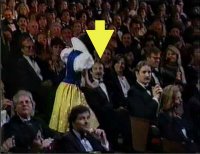 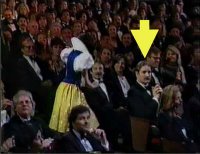 Kevin Kline     Age: 41
Then: The guy about to get a Best Supporting Actor Oscar for “A Fish Called Wanda.”
After: A couple good movies (“Soapdish” – go rent it), a lot of bad ones, and theater. Let’s not talk about the Pink Panther remake, OK? It’s too upsetting. 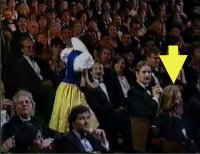 Michelle Pfeiffer    Age: 30
Then: Was seriously in her golden age in ’89. She’d just done “Married to the Mob,” and “Dangerous Liaisons;” “Fabulous Baker Boys” was up next.
Now: Took some time off for her kids and got much more selective. Seems to have started to work more often. 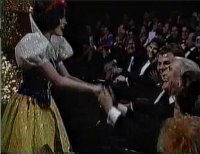 Martin Landau    Age: 57
Then: Work horse character actor (he was in six movies in 1987, none very interesting.) Nominated that night for “Tucker: A Man and His Dream.” Appears absolutely delighted by Snow White singing at him.
After: Scored two more nominations in the next five years, winning for “Ed Wood.” Continues to be a work horse. 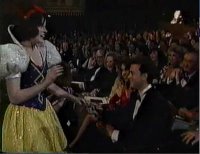 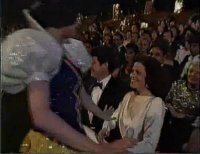 Sigourney Weaver    Age: 39
Then: Was having the best year ever. Scored the rare feat of two Oscar noms in a single year – one for “Working Girl,” one for “Gorillas in the Mist.”
After: Didn’t win either. Is now taking supporting or ensemble roles, usually in idiosyncratic stuff. Looks better at her age than you do at yours.

Sylvia Sidney, sitting right behind her, made one more movie (“Mars Attacks”) before passing on in 1999, age 88. 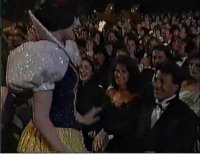 Dustin Hoffman    Age: 51
Then: Had made up for “Ishtar” the previous year by making “Rain Man.”
After: Won Oscar that night. Also taking more supporting and idiosyncratic roles, but just got a bunch of attention for “Last Chance Harvey.” 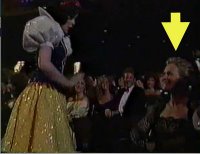 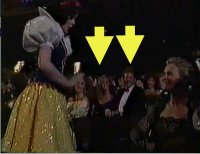 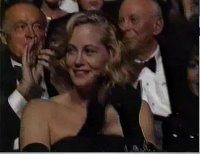 Cybill Shepherd    Age: 39
Then: Star of “Moonlighting,” which had jumped the shark a year before. Ratings were down after a long hiatus due to a Writer’s Strike, and Bruce Willis had just had a massive hit with “Die Hard.”
After: Moonlighting went off the air six episodes later (though the last one is pretty funny.) Her ’90s self-named TV show ran for three years, since then, TV movies and gig on “The L Word.”

Bob Hope
Then: Oh, we’ll be getting to him. But that might be Norman Fell he’s sitting with. The former Mr. Roper died in 1999. 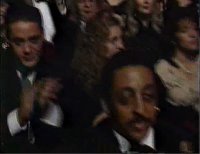 Gregory Hines    Age: 43
Then: Dancer who broke out into actor/dancer roles in “White Nights,” and “Tap.”
After: Started choreographing and acting more, dancing less, showing up in “Waiting to Exhale” and “Will and Grace.” He passed away in 2003.

This entry was posted in Blog and tagged fail, humor, movies, oscars, TV. Bookmark the permalink.