There were five production numbers in the 1993 Oscars, mostly for the best original song nominees, and ranging from “Eh” to “My eyes are melting! And so is my brain!” Charming Disney songs are ruined! Icons are embarrassed! Sailors prance! Keep reading to see the insanity realized! 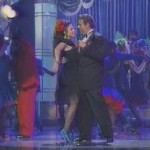 In order of best to worst:

5. “Beautiful Maria of My Soul” from “The Mambo Kings,” sung by Placido Domingo. It’s a fine, if not exactly catchy song, sung by one of the world’s finest tenors, and backed by Sheila E., the queen of Latin percussion. The movie’s about music, and dancing, so having actual dancers is appropriate. The worst thing about it is whatever WonderSuperMega bra Shiela’s wearing – that looks uncomfortable. There are some weird segues in and out of the dancing, but at least Placido gets to sing some in Spanish. It’s stunning how much better he sounds in Spanish than in English.

4. “Run to You” and “I Have Nothing” from “The Bodyguard,” sung by Natalie Cole.
This is more bad for what it isn’t than for what it is. Whitney Houston had had her daughter three weeks before the show, so couldn’t perform. That’s such a shame, because she MADE these songs. There’s a reason this is the best selling soundtrack of all time. Natalie Cole does a valiant job, though she flubs a couple notes and is missing the raw power in her voice. We could do without the modern ballet you can barely see during “Run to You,” and Natalie thankfully ditches the giant scrunchie she’s wearing. 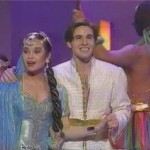 3.”A Whole New World” from “Aladdin,” sung by Brad Kane and Lea Salonga. Now we’re getting into the bad numbers. Remember how charming this scene is in the movie? Well, this isn’t. Because in the movie, they actually are looking at the world. Here, they have to slowly wander around a stage. When he tells her not to dare close her eyes, you’re like…from what? The flaming kebabs? The contortionist? It’s also a great example of Exotic Orientalism – the east is super exotic, but also undifferentiated – there’s Arab, Moroccan, Indian stuff all smashed together into one big bloated pile. The thing I actually like about it is that they got the actual voice actors from the movie instead of Peebo Bryson and Regina Belle, who sang the radio single. 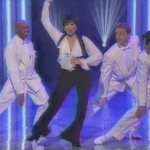 2. “Ladies Day,” sung by Liza Minnelli. This is an original song by Kander and Ebb, celebrating the whole “Year of the Woman” thing. Now this shit is stupid. I mean, the whole “Year of the Woman” thing is stupid, but this is just…Ugh. To be fair, it’s an old-style Broadway number that only Liza could pull off. That’s as close to a compliment as I’m going to get. The message is like something from the mid-’70s, not 1993 – the ‘girls can have any job they want to do’ message was groundbreaking back in “Free to Be You and Me.” She shouts out Dawn Steel and Sherry Lansing, the only female executives in Hollywood at the time. Actually, a ton of the jobs listed are things only a tiny number of women had broken in to – groundbreaking, but a bit early to celebrate like the war for equality was won. For instance, we had our first female attorney general and there was one woman on the Supreme Court. Women weren’t “fighting in desert heat,” because women weren’t in combat. We hadn’t had a female Secretary of State, which then was the norm until just this year. Speaking of which, you know what Hillary led the way to? A failed deal on healthcare.

And then some of things she lists as jobs women can do are just…was it the only thing they could think of that rhymed? Running a lab? Depolluting the air? The lip-sync is off sometimes. The fucking sailor suits. I really don’t know who thought of this, but that so much effort went into it saddens me. It’s stupid.

1. “A Friend Like Me,” from “Aladdin,” sung by Nell Carter
Why Nell Carter? No idea. “Gimme a Break!” had been off the air six years by that point. She had done Broadway before and after, but I can’t find much on what she was doing circa 1993, which adds to the randomness.

First off, a parade of guys and banners and stuff come in, meant to imply the “Prince Ali” number from the movie, but totally making me think of one of the digressions in “The Star Wars Holiday Special.” This already makes no sense, because Aladdin was only a prince because he had the genie. But now he’s meeting the genie for the first time? Aladdin rubs rather sexily on the lamp, and Nell pops out. She flubs her line. Then the singing…I don’t know, I guess she’s going for a bragging, above-it-all attitude, but she comes across as low-energy and bored. Does she know this isn’t rehearsal?

Then, because this is a song from a children’s movie, she summons a pack of male strippers in tight gold pants to dance for her amusement, and yells at some skinny bitches. The only point in the song that would naturally lead to a dancer doing something: “Well, looky here!” leads to…nothing to look at. Then some kids tap-dance really out of sync, while Nell hollers and chases one for no reason. A bunch of boys chase the girls away (but it’s Ladies Day!) and have a goddamn hip-hop break. I don’t know why they used so many kids in this number – the genie is trying to impress us with what it can do, and a lot of the kids are awful.

Finally, FINALLY there are 30 seconds of what this number could have been – a bunch of Broadway style tap/swing dancing with the big brassy music going. Then there’s a fat joke and your ability to have an erection disappears to the sound of Nell Carter shrieking “Give it up!” except it sounds like “Get it up! Get it up!” and you’re now cursed to hear that every time you’re naked. Forever. Everybody falls down. My brain fell out my nose.

This entry was posted in Blog and tagged comedy, fail, movies, oscars. Bookmark the permalink.